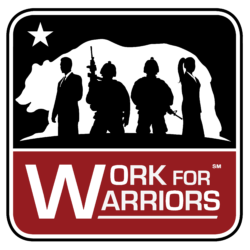 “I want to thank Work For Warriors (WFW) for the opportunity and career I now have in the Aerospace Industry! In 2017, WFW assisted me in finding a fast job while I continued looking for something in the Tech Sector. 9 months later, WFW helped me get into an Entry Level Tech role and then 9 months later, in 2018 WFW submitted my resume to an Aerospace Industry leader, I interviewed and was hired as Clean Room Tech II (effectively a janitor) at $27 per hour. After 6 months my work ethic and ability to adapt and learn was noticed by another section and I was transferred and promoted to a Flight Tech II position at $33 per hour. This new role gave me the opportunity to build flight hardware and ground support equipment. I worked hard and worked on a few projects as a Flight Tech and by May 2021 I was promoted to Electrical Mechanical Technician III at $39 per hour. On May 2022, I was asked to apply for another position as a System Safety Technician III which I took. That job came with $4.00 raise and now I’m making $43.00 per hour.

WFW gave me the opportunity and I my experience and discipline from the military helped me surpass everyone’s expectations. In less than 4 years I have climbed the ladder dramatically. For me, that’s a short timeline that I never anticipated but hard work, sacrifice, and a little networking goes a long way. Thanks again WFW for all you do!”

Let Us Help You

Find out what great businesses are hiring